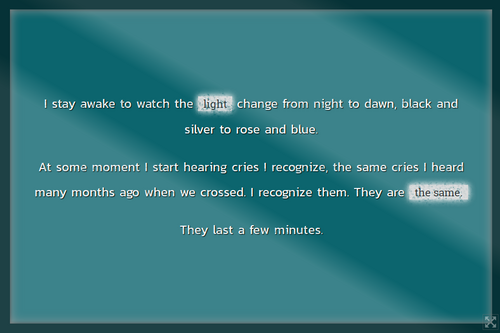 The structure of the story, as it is engaged by the reader, should have a similar effect to that of discovering a puzzling selection of items in a container of unlabelled material from someone else’s life. The end of the story, instead of providing closure, tries to recreate the moment in which some fragments of evidence–which might not actually be evidence–flicker together to suggest the possibility of a pattern that might never have been there anyway.

This quote wasn't in my head in October 2017 when I wrote "Where we will live nine days" (though I surely had read it before). I found it later, and it hit me that it is the best possible expression of what I would have liked to reach with my story, and perhaps a good rule to measure if it succeeds or fails. But it seems to me that the definition of the goal contains its own impossibility, so any attempts are doomed to fail.

In my mind, the position of the player was that of an interrogator or interviewer, trying to obtain answers from an uncooperative, unreliable person who has trouble remembering or explaining.

Internally, the system is very simple. Passages can be tagged with several subjects and phases of the story. Each link you click picks a subject; the phase is determined by turn count; the story picks one random passage from all the appropriate ones (with a fallback to prevent repetitions); and some turns override it and show mandatory text. An advantage of this method is that I could just write more passages with zero worry about structure.

In-game text and the itch page hint at this mechanic but I didn't want to be explicit about it, so there's no "the story is a fixed memory and you can only choose aspects to explore" explanation. Some people didn't like not knowing what links did. I understand that frustration, but I'm still in two minds about it; I love the absence of explanation way too much.

I did change one thing after a review however. When I read mathbrush's review on IFDB I immediately edited the game and released a new version. The trigger: he said that perhaps it's an alt-earth. The change: one word. I replaced "sea" with "Mediterranean".

The game was rushed, undertested and experimental. That's why it surprises me that no one has complained about English problems (it's my second language), and that the semi-random passages sometimes produce results way better than I hoped.

My thanks to everyone who tried it!

Where we'll live for nine days